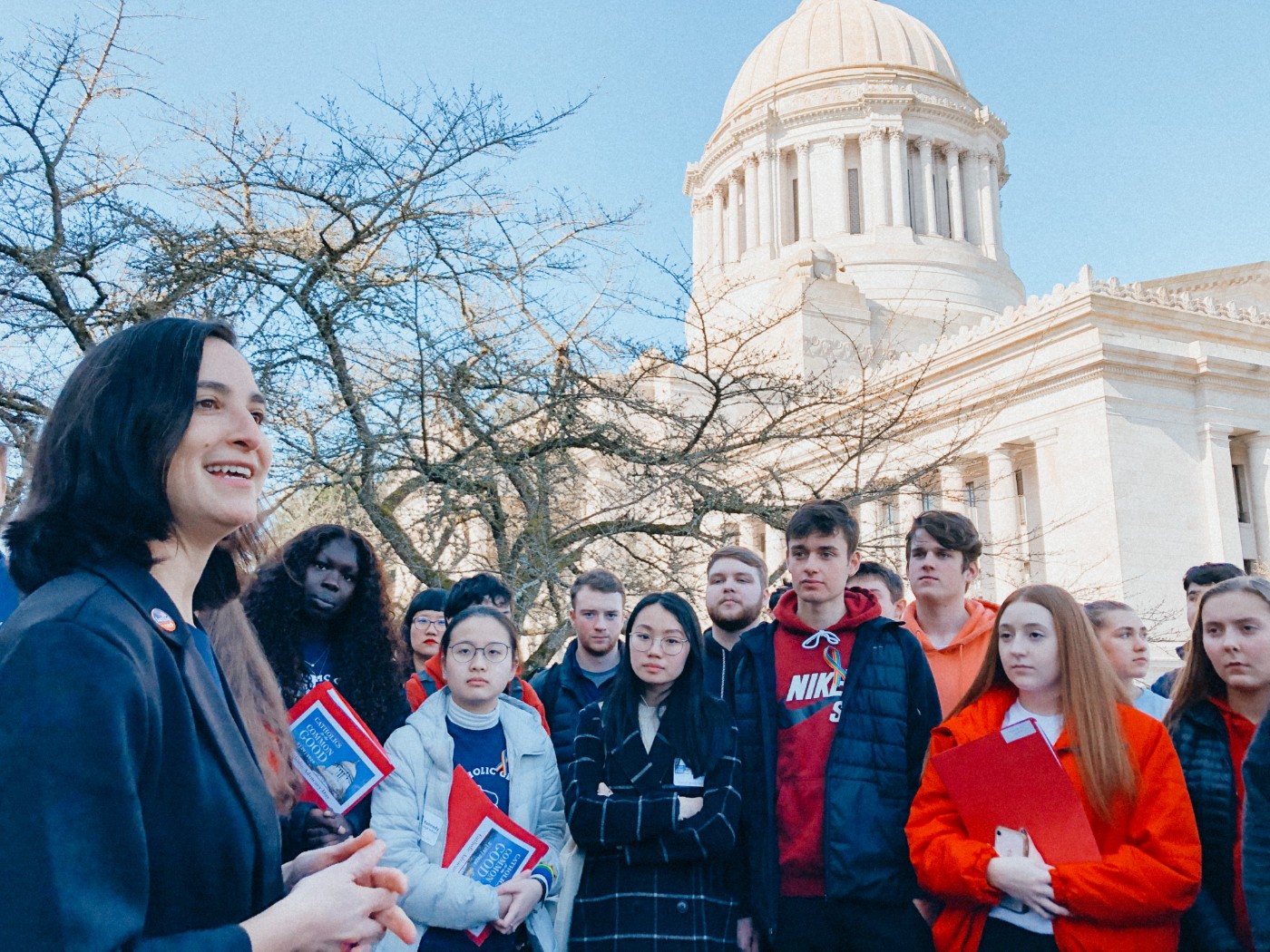 The senior honors Public Policy/ Social Justice course emphasizes student-centered activities designed to encourage faith-based civic action. This unique course affords students the opportunity to learn in-depth about how vulnerable and voiceless populations in our state need the help of those who can speak out on their behalf. This often requires learning about sound advocacy practices as well as having patience and perseverance – it is also a valuable life skill. Moreover, becoming an effective advocate for those in need fulfills both the mission of the Gospel, as well as the requirements for being a critical and active citizen.

Each February, fifty Lancer seniors from this class travel to Olympia to participate in Catholic Advocacy Day (CAD) organized by the Intercommunity Peace and Justice Center. While at CAD, students learn about specific issues affecting poor and marginalized communities. Students then develop and practice strategies for how to advocate on behalf of these communities before meeting with state lawmakers and sharing their views.

This year, Catholic Advocacy Day occurred as our community was in crisis. In response to the resignation of two beloved teachers, many students voiced their concern for what happened by holding organized protests. Ironically, all of this happened just two days prior to our planned trip to CAD. Amid these protests, Public Policy/Honors Social Justice teachers John Wright and Jenny Farrell ’92 met to decide whether attending CAD this year would be appropriate given the situation. While feeling very conflicted about all that was unfolding in front of them, they were in admiration of the protesting students who were respectfully voicing their opinions. They watched as student leaders led the event with prayer, and then expressed their concerns in an extraordinarily articulate and respectful manner. Considering this, the teachers wondered if their students would still want to attend the CAD field trip to Olympia.

With all this turmoil in mind, Mr. Wright and Ms. Farrell decided to bring the decision to the students – many of whom were themselves directly involved in organizing the protests. Framing the discussion, Ms. Farrell highlighted the topics the students would be supporting and advocating for by attending CAD. Issues such as bills that would mitigate human trafficking, improve access to funding for temporary assistance for needy families (TANF), abolish the death penalty, and support the Clean Fuel Standard. Highlighting what they witnessed during the student-led protests, the teachers expressed how they thought it would be important to stand up – especially in this moment – as Catholics and extend the power of their voices to these issues. The overwhelming majority of the students decided to attend.

Upon arriving in Olympia, students attended a training session with other Catholics from all over the state. After scanning the packed room, it was evidently clear the group of Lancers had significantly lowered the median age by attending! Many of the seasoned attendees expressed delight in seeing such an infusion of youth into their movement. After this meeting, students spent the rest of the day lobbying elected officials including assistants to Representative Eileen Cody and Representative Joe Fitzgibbon from the 34th District. Students also had the unique opportunity to meet with two Kennedy Catholic alums – Senator Rebecca Saldaña ’95 and Senator Joe Nguyen ’02. Interestingly, both Saldaña and Nguyen had taken the very class to which they were now speaking. The Senators affirmed our students’ advocacy and urged them to stay engaged in social justice topics and to always stand up for what they believe is right.

From there, several students were also able to register to vote in the Secretary of State’s Office. This activity is always a highlight of this field trip as it celebrates a rite of passage toward civic engagement.

This experience gave our students a chance to stand up for the voiceless and practice the Catholic Social Teaching of Rights and Responsibilities by choosing to represent our school and our faith.

As a Catholic community, we hope this experience fuels future action and lights a flame that will give students the confidence and skills needed to bring more of God’s light into the world. ◆