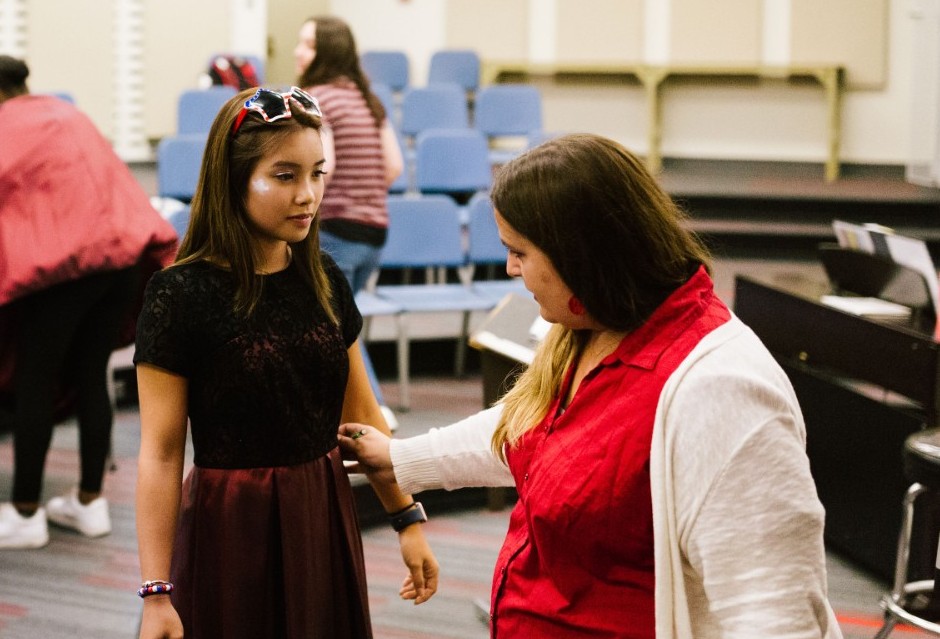 Four Months Preparing for One Night

We decided to take you on a behind-the-scenes tour of Choral Director, Lindsay Brown’s process for getting students singing on the stage by mid-December each year.

Spring
In the spring, Lindsay proposes the next year’s concert date to be added to the school calendar. Once approved, she contacts the desired venue and crosses her fingers that she can lock in the requested date. If all goes well, the process picks back up at the beginning of the next school year.

September
September is when preparation really starts to pick up. Lindsay begins to listen intently to her new choir classes, determines voicing/instrumentation and desired level of music difficulty for the concert. She’ll then order uniforms for her students and nerd out over every possible piece of Christmas music. From there, she’ll pick the top contenders, because, after all, a concert can’t actually be seven hours long.

October
The process continues in October, when Lindsay and Instrumental Music Director, Dan Ruiter, consult with each other on what will be performed. They’ll often undoubtedly find duplicates and play an epic game of rock-paper-scissors to decide which of them changes music selections. She’ll then order music that’s not already in the school’s music library and begin distributing to choir students for practice. Lindsay’s confident that if students aren’t singing Christmas songs in their Halloween costumes, they’ve simply waited too long!

November
There’s a lot that happens in the month leading up to the big day. In November, students’ uniforms arrive, giving them the opportunity to try on and return what doesn’t work. Lindsay will cement the concert finale, incorporating every choir class into one harmonious group. Then she’ll have the group practice … a lot.

December
December is for finishing touches on all things Christmas concert. Logistically, Lindsay will reserve the bus, prepare with the venue and order pizza for students the night of (some of which will inevitably spill on their uniforms just before walking on stage). She’ll work with Mr. Ruiter’s instrumentalists so their incorporation with vocals is seamless, and practices with students in at least three different locations to get used to different acoustics. Then, students learn how to enter the stage, exit and bow. Lindsay mentions that she wants the vocalists to, “trust each other and become completely confident in their collective ability.” Then, she will step back, breathe deep, and trust the process for the night.

The phenomenal work put on by Lindsay Brown, Dan Ruiter and their students for this big night of music is astounding. The months of preparation truly pays off when students sing together for their family, friends and teachers.

We hope to see you at this year’s Christmas Concert on Tuesday, December 17 at 7:00pm at the Highline Performing Arts Center. All music ensembles will perform.