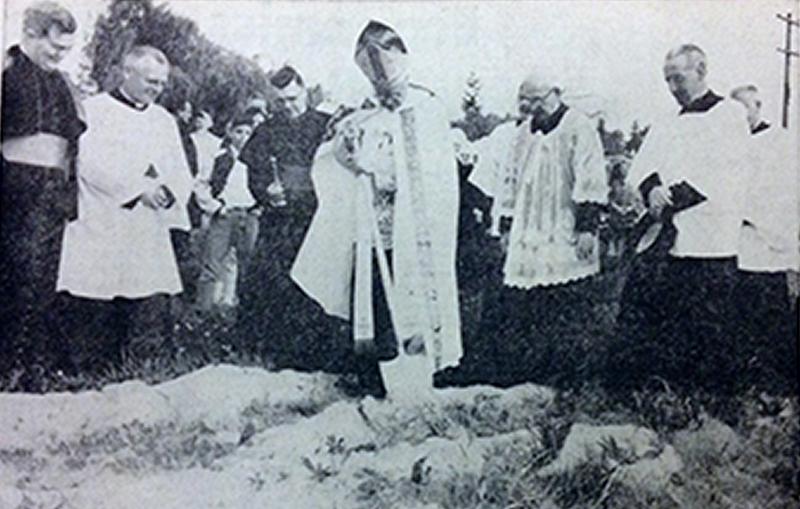 In 1962, efforts began to open a co-educational Catholic High School in south Seattle. While in Rome in 1963, the Archbishop of Seattle learned of the assassination of U.S. President John F. Kennedy and announced that the yet to be built school would be named in his memory. In 1965, ground is broken to begin construction of John F. Kennedy Memorial High School. Monsignor John Doogan is appointed to be the school’s first principal. Future principals of the school included John Dempsey, John Goodwin and John C. (Jack) Schuster.

The first class of freshman students enrolled in the fall of 1966 and classes were conducted in portables at St. Thomas in Riverton Heights due to school construction. The 181 students from St. Thomas moved their classrooms in the spring to the partially completed school and began classes on the first floor of B-wing.

On May 25, 1968, the school grounds were blessed and dedicated and the cornerstone was laid. The design of the school is U-shape with the chapel located at the center of the “U” to represent the church as the central figure of the school, both literally and figuratively.

The school has changed in many ways since its inception. Over the years, the curriculum has expanded to include the addition of innovative and challenging electives and advanced courses, with numerous AP and college credit offerings. Today, students benefit from the addition of advanced technology and state-of-the-art science labs. Over the years, additions to the academic program included the formation of the Aquinas Honors Program, the International Program and more recently, the Blessed Mother Teresa Program.

Parent volunteer groups played an active role in the school. Parent Club, BSHARP and the Booster Club all support the development of successful school programs including outstanding athletics and award-winning performing and fine arts.

Student traditions continue to be enriched by years of memories and new traditions have been added.

Many successful former and ongoing fundraisers have given our entire community the opportunity to contribute to the schools’ growth. Today, the KATCH Auction and Annual Appeal help provide and sustain outstanding academic and athletic programs, professional development, campus ministry programs and a rich community environment, enabling Kennedy Catholic to meet new challenges and extend our current achievements. Many will remember participating in the World’s Finest Chocolate sale and annual food drive – both grand traditions.

In 2004, Archbishop Alexander Joseph Brunett appointed Mike Prato to be our fifth principal. Shortly thereafter, guided by the feedback of the Archbishop to foster and advance the Catholic identity of the school, the school name was changed to John F. Kennedy Catholic High School. Mike Prato served as the school President until his retirement in the spring of 2020. Guided by the Archdioceses of Seattle, his successor Matthew Mohs took on the role of President/Principal to begin the 2020-2021 academic year.

Kennedy Catholic graduates receive incredible scholarship awards to attend countless universities and colleges. Lancers excel in academics, yet are talented artists, athletes, musicians, humanitarians, and servant leaders. In the nearly fifty years since the first graduating class of 1970, John F. Kennedy Catholic High School has graduated over 9000 alumni who are proud to be called “Lancers for Life”.